Scrambling to Save My Free Domain Names

As I mentioned previously, I've been having fun setting up simple websites for myself and a few others. I wanted to use custom domains for these simply because they look better and are easier to remember than the free subdomains that come with free blogs. I mean, which would you prefer, riadess.com or riadess.blogspot.com?

The thing is, buying domain names can be an expensive undertaking. I bought the domain for this blog, but I wasn't willing to shell out money for a domain that might not even be used much by the person I would give it to. That is why I searched for free domain names. I acquired a few and mapped them to the websites I set up. I also reserved some to be used for future projects.

This past week, I received a few messages from the free registrar. 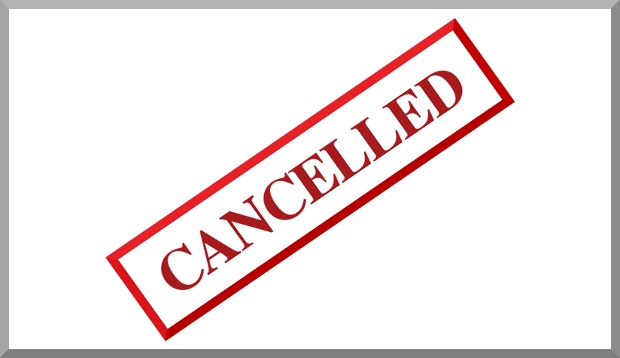 It turns out that if you don't use the domains immediately, they can and will be cancelled. Caveat emptor. I lost a few and had to set up temporary websites for the ones that were left.

Now I have three new websites:
The first two are hosted on Blogger (just like this one) and the last one is hosted on Tumblr. Why Blogger and Tumblr? Both of these services allow users to map domains for free. You can also tweak the HTML code a bit. I would have loved to go with Wordpress, but the fully-hosted version charges $13 a year just for domain mapping. The self-hosted version is free, but obviously, I would need to set up a hosting account somewhere. There are a lot of free web hosting services out there, but most of them charge a fee for domain mapping or have minimum use requirements (a certain number of views over a certain period of time) or both.

If you would like to recommend a free web host that lets you customize the HTML code and map domains for free, please let me know.

Why, you may I ask, am I setting up new blogs when I can barely handle this one? I enjoy the learning process, and I love tinkering. Then again, perhaps I'm a glutton for punishment, ha ha.
2 comments:

Challenging Myself to Read More

I discovered Goodreads in the middle of 2014. They had a reading challenge, and I signed up for it. I don't remember how many books I had hoped to read, but I only managed to read 5 books.


I joined again this year and pledged to read 52 books. Unfortunately, I have only found time to read six.


That makes me really sad, because I truly love books. When I was a kid, there were times that my mother would turn my bedroom lights off in order to get me to stop reading and go to sleep. To her chagrin, however, I would simply sit next to the window and read by moonlight.

I still have approximately 40 days before the year ends, so I might still be able to reach my target. If I read at least three books every two days, I'll be finished in no time. No thick novels though -- I'll save those for next year. For now, I need to stick to books with less than 100 pages.  I searched online and found these lists:

1. 15 Life-Changing Books You Can Read in a Day -- Time
2. Most influential books under 100 pages -- Goodreads
3. 50 Thin Classics -- Alameda County Library
4. These Amazing Classic Books Are So Short You Have No Excuse Not To Read Them -- Huffington Post
5. 8 Most Influential Books Under 100 Pages -- WhytoRead
6. The Best Books Under 100 Pages Every Guy Should Read -- Cool Material
7. 35 classic quick-read books -- London Free Press
8. 50 short books for busy people -- Ebook Friendly
9. 24 books to read in under an hour (infographic) -- Ebook Friendly

I think I will be able to complete this challenge.
1 comment:

Having Fun with HTML

When I bought this domain name, it came with 3 free web pages. I simply selected a template and added a few photos. It was very easy to set up. I also wanted a blog, so I created this on Blogger and set it up on a subdomain. That took a little more work. I had to familiarize myself with concepts such as domain mapping and nameservers.

I had fun with that, which is why I created these two nameplate websites. I used a free web host with a site builder. 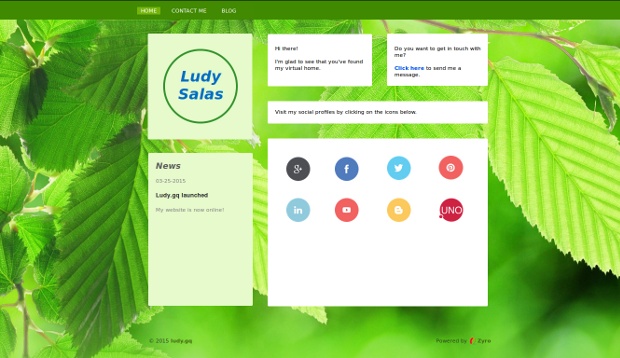 My other domain name included a hosting package without a site builder. I thought about using Wordpress (the self-hosted version), but I couldn't because my tiny hosting plan didn't include SQL. Instead, I used a free editor called KompoZer and created this simple page. 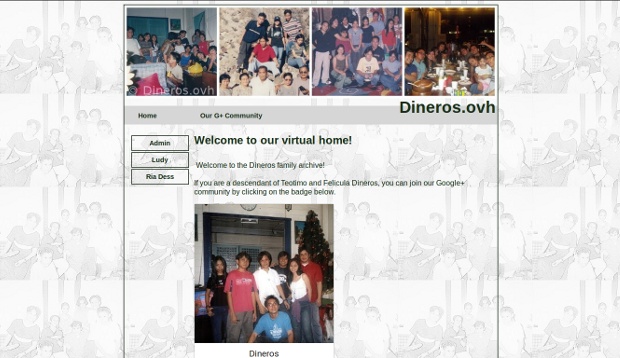 It looks rather plain, I know, but it's much better than a parked page, right?

The problem with KompoZer is that I couldn't get the Google+ community badge to appear because it kept deleting part of the code.  I had to edit the HTML using a text editor. I also learned a little about using CSS.

I plan on giving subdomains and email addresses to my relatives. To show them what they can do with a subdomain, I made this Tumblr blog using one of the free themes. I was able to add a couple of widgets because Tumblr allows us to modify the HTML code. 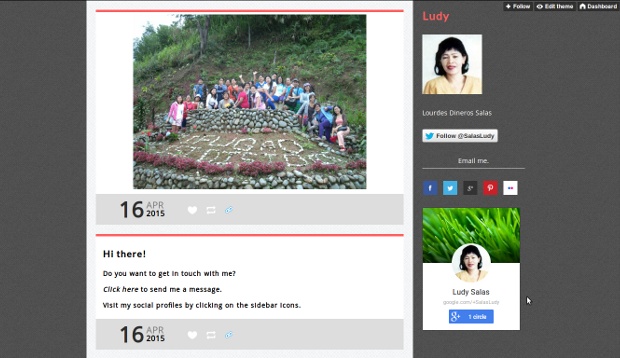 I enjoyed this so much that I've decided to revamp my website. I want to play around with CSS, perhaps even make my website mobile-friendly (according to the Google Mobile-Friendly Test, it wasn't). I can't edit the HTML on my free web pages, however, so I'm going to host it somewhere else.

Don't get me wrong, I love my registrar. Their rates are reasonable and they provide excellent support. They even gave me a free domain during their 15th anniversary celebration. Unfortunately, right now I can't afford to pay for hosting.

I'm probably going to use Tumblr. If you are aware of another free web host that lets you customize the HTML code and map domains for free, please let me know.
2 comments:

Trying to Learn a New Language

As a child, I would often hear my mom and my grandmother speaking in Bicolano. I wanted to join their conversation, so I decided that I would learn that dialect. Nobody had time to teach me, and there were no Bicolano dictionaries at the book stores, so I made my own. It was just a tiny notebook (the size of a credit card) made out of a few sheets of graphing paper that I cut up and stapled together. I added words to it every time my grandmother visited us. That project lasted a few weeks, and then I completely forgot about it.

When I was seventeen, I tried to learn German. I had no pressing reason for learning the language. I just thought it was cool because Jose Rizal spoke German. I also loved the Grimms' fairy tales and wanted to read them in their original form.

I enrolled in a language course at the local Goethe-Institut, joined their library, and bought several workbooks. German wasn't as difficult as I thought it would be. I had a lot of fun with it. Sadly, life got in the way and my interest waned.

My cousin Edgar tried to convince me to study Japanese instead, so I bought a book, watched a few videos, and ended up remembering just one line -- Kore wa hon desu ka (Is this a book?). As a joke, I repeat that line every now and then. I'm lucky that no one has thrown a book at me yet, though I suspect many have wanted to.

Last year, I decided that Spanish would be much easier to learn. I signed up on Duolingo. Learning the language through a game made the task easier, but that was not enough to keep me hooked. It wasn't that I was no longer interested. I was just too busy.

Esperanto also got my attention. I read that it was very simple and easy to master, and that with two weeks of studying, I would already be capable of having a conversation in Esperanto. Unfortunately, no matter how much I tried, I couldn't muster enough interest to keep going.

Have I finally given up?  I haven't, and I won't. I'm going to work on German again. This time, I'm giving myself a concrete but easy-to-reach goal -- A1 level in three months, then A2 before the end of the year. I will also set up a blog where I will write exclusively in German. If you would like to check on my progress, you can click here to visit my German blog. Wish me luck!

Getting Nostalgic about a Domain Name 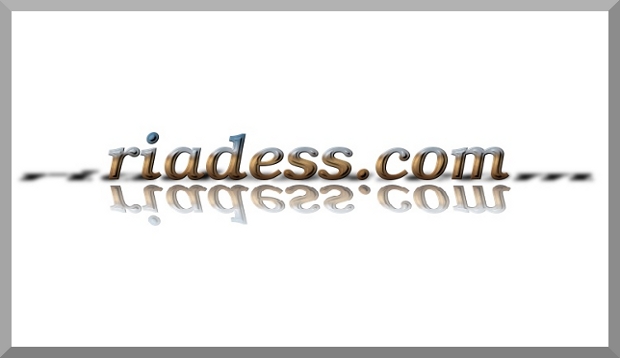 15 years ago, I had my first domain name. I couldn't do much with it -- just email forwarding and URL cloaking -- but it was mine. I received it for free from NameZero. It wasn't even registered in my name, but that didn't matter. I loved that domain name.

I used it for my Geocities website. There was no webmail or SMTP included in the domain package, but I figured out a way to send email with my domain listed as the sender. I used that email address every chance I had.

A year passed. The free registration expired. I received messages from NameZero asking for the renewal payment. It was in the amount of $24, if I remember correctly. As the weeks passed, the price kept going down, but unfortunately for me, I was a kid with no money, no credit card, and no way to pay NameZero, so my beloved domain name and I had to part ways.

I've been planning to buy a domain name for some time now, and two weeks ago, I finally got around to it. It's not exactly the same one I had 15 years ago, but for some reason I feel like I just had a reunion with an old friend. Oh my dear domain name, how I missed you!
No comments:
Newer Posts Home
Subscribe to: Posts (Atom)

The Sign of the Four
by Arthur Conan Doyle

A Study in Scarlet
by Arthur Conan Doyle
tagged: favorites

Pride and Prejudice
by Jane Austen